Today, Amazon announced that it will significantly curb its use of pre-employment drug tests for marijuana:

As one the largest employers in the world, this means thousands of workers will no longer be required to abstain from cannabis for weeks before an interview or chug detox drinks to remove remnants of THC metabolites from their system. For both medicinal and recreational users, this is welcome news.

For employers, an improvement to marijuana drug-testing policy was long overdue. With simultaneous spikes in drug positivity rates and labor shortages, it has become painfully apparent that pre-employment screening for THC might not be sustainable anymore. 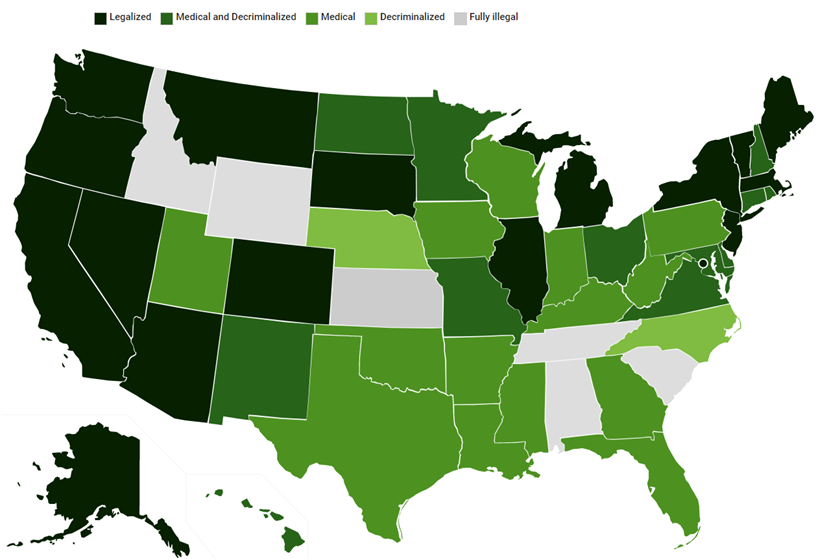 As marijuana only remains fully illegal in 6 US states, many other companies are likely to follow Amazon's lead. (Image source: Disa.com)

Seeing as the highest increases in marijuana and all drug positivity between 2016 and 2020 occurred in the transportation and warehousing industries, Amazon's move to adjust its drug testing policy was very timely. Clearly, traditional drug testing has not succeeded in providing a deterrent for workers to abstain from using cannabis, proving its ineffectiveness as a safety measure.

"Drug testing has never provided an accurate indication of a person's ability to perform their job and yet this incredibly invasive practice has locked out millions of people who use drugs — both licit and illicit — from the workplace, " says the Drug Policy Alliance (NPR).

And "locking out" millions of people from the workplace is not an option right now.

Hiring difficulties, labor shortages, absenteeism, and turnover are at an all-time high:

Of course, the COVID-19 pandemic has contributed to the pressure felt by these industries by directly influencing drug-positivity rates and exacerbating labor shortages.

According to the CDC, 40% of US adults reported struggling with mental health or substance abuse in June 2020. With the rise of these issues, workplaces are looking for more proactive and comprehensive ways of identifying impairment, such as real-time cognitive impairment testing. They're realizing that as they reject a large number of qualified applicants because of traces of THC in their systems, their other employees are silently impaired due to burnout, stress, fatigue, and mental distress.

Relieving workers who were impaired in real-time of their overtime was a challenge because not only were applicants failing their THC screens, few were applying in the first place:

With labor shortages and drug positivity both reaching all-time highs, change was on the horizon. Amazon took the lead.

For Amazon, the shift in policy represents a giant step forward in hiring practices. As marijuana legalization spreads across more states and positivity rates on drug-tests continue to rise exponentially, hiring workers who can pass the THC screen has grown almost impossible.

The first digital cognitive impairment tests were invented in the early 1980s.

First came the psychomotor vigilance test, a measure of reaction time lasting up to 20 minutes. NASA used it for their astronauts but it wasn't suitable for the workplace.

Then came wearable devices, cameras, pupil-trackers, brain wave detectors. They were invasive and workers didn't like them.

Somewhere in between, the AlertMeter® was created--a 60-second game-like cognitive impairment app. It was fast, it was easy, the workers liked it, and most importantly, it worked.

Many safety-sensitive workplaces instantly felt the brunt of this social change--hiring difficulties, reduced morale, higher turnover, and more dismissals due to random drug tests coming up positive for THC.

Companies who embraced the shifts in drug testing policies, such as removing marijuana from pre-employment tests and reducing or eliminating random drug testing, often go on to experience significant organizational improvements upon adding AlertMeter® to their safety culture initiatives. These results were verified by one such company's insurance provider:

Now that Amazon has set this new precedent for manufacturing and transportation industries, more companies are likely to follow suit. Otherwise, they risk losing more employees to Amazon, where they won't be required to get pre-employment marijuana tested. These industries cannot afford losing more employees on top of the labor shortages they've already experienced this year. It has been less than 24 hours since the announcement from Amazon was released and here at Predictive Safety, we're already seeing the rush.

Hiring just got harder. To get moving before it's too late, schedule a demo of the AlertMeter®.